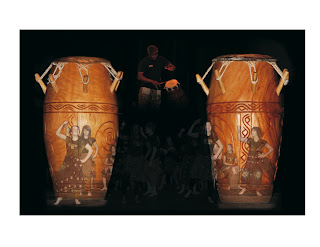 So, last night Baobab Youth had an invitation to perform for an event for the Alliance Against Malaria, an organization that counts Tony Blair among its patrons. What an incredible and dedicated group of people! The event was held at the new Black Box Theatre at the Shenkman Centre in Orleans. After our regular rehearsal we ate a quick pizza dinner and piled into cars to cross the city. We arrived early enough to get a full tour of both amazing stages, facilitated by ‘Andrew’ who we had known as stage manager from the previous incarnation of the space, the Orleans Town Hall. He was prouder than a new daddy! Both the large and small spaces are incredible state-of-the-art facilities that Ottawa is lucky to have. We performed for about 30 minutes after MP Glen Pearson spoke about the organization’s initiatives to provide mosquito nets in Africa. We were fortunate enough to have Dominic Donkor with us from Montréal, who we had been rehearsing with for our upcoming Ghana Beats & Eats show, so we had a chance to try out some repertoire with him. Look at the amazing photo that Colleen Gray took and created for us at that gig. Can’t wait to go back, either as a performer again, or an audience member! Kudos to Christine Tremblay and Arts Ottawa East!